Aishwarya Rai has become rather choosy in signing roles that pitch her alongside hubby Abhishek Bachchan, we hear that she has rather recommended Katrina Kaif for a role alongside Abhishek. 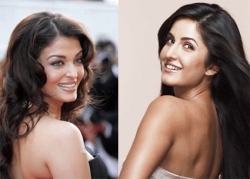 May be it’s a lesson hard learnt after the super debacle of Raavan, but Ash is wary of another professional faux pas and that’s quite evident from the buzz that she’s turned down director Vipul Amrutlal Shah’s next film that would have paired her with hubby Abhi. Rather, we hear that she’s recommended that Shah should go ahead and sign Katrina Kaif for the film.
Ash isn’t in a rush to sign new projects with Abhi until and unless the project is unique and creatively satisfying enough to lure her into signing on the dotted line. And this is not the first role with Abhi that Ash has turned down.
She first declined to do Dostana opposite him and also turned down Abhinav Deo’s Game with hubby dear.
Posted by Deepa at 8:34 PM