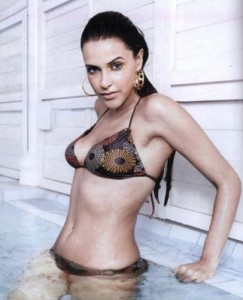 Age is never a constraint when a man sees a beautiful woman but then it is also a matter of character and decency depending on who that person is. Well, such things don’t seem to apply for the senior director Dasari Narayana Rao.
Apparently, he was sharing his thoughts on his recent dud 'Parama Veera Chakra'. While he was doing his best to comment on the film's miserable performance, here is something interesting. It is heard that Dasari minced no words about how he was driven crazy by the oomph show of the Bollywood bombshell Neha Dhupia.
Incidentally, Neha came up with a song that really stirred the loins of many men but hearing something like that from someone like Dasari was a bit of a shocker. Perhaps it is time for him to focus on his films than his female admiration, advice the cine folks.