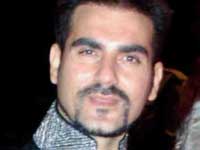 Producer Arbaaz Khan has confirmed that the Telugu rights of Bollywood blockbuster Dabangg has been sold to Pawan Kalyan. He has put an end to the speculations, which said that the rights of the film are yet to be sold.
Earlier, after announcing that Gabbar Singh is a remake of Dabangg, a few reports claimed that Pawan Kalyan had not acquired the rights and producer Arbaaz was still in negotiations. It was also reported that makers of Gabbar Singh would land in trouble if they claim it as Dabangg's remake.
However, Dabangg maker has clarified and said that it is sold to Pawan Kalyan. He is also happy for selling the Telugu rights to power star.
Posted by Deepa at 1:52 PM