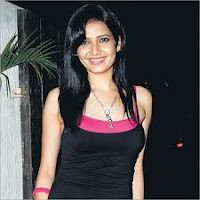 Prem's next film, I'm Sorry... Mathe Banni Preethsona, may feature three heroines and 10 songs, but it's the supposed kiss between him and his co-star Karishma Tannah that's got people talking.
The film's director Ravindra says that a kissing scene was planned and in earlier reports claimed that it was even shot. However, Prem says otherwise despite the fact that stills of the scene have been leaked. "We don't kiss, but an intimate scene has been shot in which our lips almost touch. It can't be considered a kiss," says Prem.
He does, however, agree that kiss was part of the plan. "But I didn't want to do it because it would upset my fans. My films are for family audiences. How can I hurt them by kissing my heroines?" he asks.
There are also rumours that the film sees Prem go nude. "There's a shower scene, but he's not completely nude. Prem is a good-looking hero who has a lot of female fans. I cashed in on this," says Ravindra
In fact, the director was very confident about casting Prem in I'm Sorry... despite the actor not having scored a hit at the box office in quite a while. "I was looking for a handsome hero when a friend suggested Prem. He wasn't keen when I approached him the first time because he wasn't confident in me as I had worked in Bollywood. But when I narrated the script to him, he jumped at it and made me promise that I wouldn't think of anyone else for the role but him," recalls Ravindra.
I'm Sorry... also features Sanjjanaa in a "powerful" role and a third heroine who plays an "anchoring" role, says Ravindra. "This time I've left it to the audience to choose their favourite heroine on-screen," explains Ravindra, who plans to release the film on Valentine's Day.
Posted by Deepa at 7:57 PM