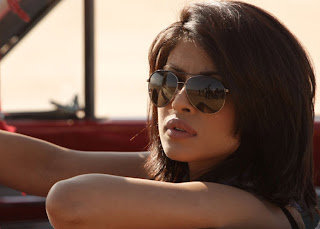 Bollywood beauty Priyanka Chopra, who has created magic on the big screen with her glamour and performance, was cheated by her tenant. One Rakesh Kapoor residing in Priyanka's flat at Oberoi Sky Gardens in Andheri said no to check out of the flat when asked to do so. Furthermore, he opted to retain the house showing some forged documents in connection with the rental deal of the cited flat. Rakesh is residing in the house since two years and is demanding an extension of stay.
He further claims that Priyanka has entered a contract with him which says that the flat should be sold to him and nobody else unless he declines to buy it. However, acting on a complaint from Priyanka's father Ashok Chopra, the Mumbai police have filed a case against Rakesh Kapoor under sections 465, 467, 468, 474, 420 of the Indian Penal Code.
Posted by Deepa at 6:06 PM