Kareena Kapoor to don traditional attire in the 'Bodyguard' remake
After sporting chic Western attire for her role as a hairstylist in Karan Johar's Short Term Shaadi, Kareena Kapoor will go ethnic for Atul Agnihotri's Bodyguard.
She plays a don's beti in the latter and will mostly Indian traditional clothes including bright kurtas with lots of oxidised jewellery. Bodyguard, directed by Siddique, is an adaptation of a hit Malayalam flick. 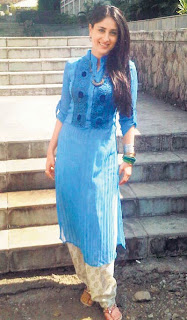 Bebo has been styled by Manish Malhotra for both films. Says a source, "MM has given her a very different look in Bodyguard, as she plays a college-going girl who is also a don's daughter.

So she wears bright and colourful Pakistani long kurtas with block print salwars. Kareena is known to be a fashion icon having started the Geet kurtis in Jab We Met.

This will start a new trend for youngsters too of long Pakistani kurtas with high slits and big ghera salwars."

The Kapoor gal will accessorise with silver antique oxidised jewellery, beaded bags and accessories. "There are lots of metallic and thread work bangles to add an Indian touch. 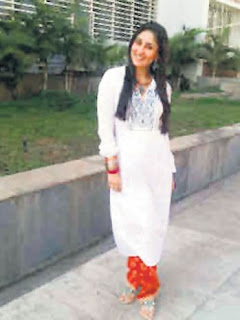 Manish sourced the accessories from Pune, Delhi and Mumbai. Most of the outfits, she will wear, have an embroidered patch with crochet and threadwork.

Kareena has kept her hair long, straight and simple in the film," adds the source.

INSPIRATION
The original Malayalam flick revolves around a young man Jayakrishnan who adulates anyone with a trace of heroism and offers to be their bodyguard.

A business tycoon Ashokan hires him to follow and safeguard his only daughter Ammu. He follows her everywhere.

To distract him, she calls him from an unknown number claiming to love him. Years later, Jayakrishnan realises that his real lover is Ammu, who's waited for him for so many years faithfully and marries her.
Posted by Deepa at 2:16 PM