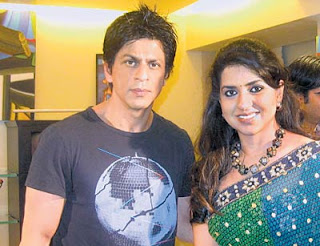 And her first guest on the show is Shah Rukh Khan.

"India First features celebrities from different walks of life as they elaborate what their vision for the country is," explains the activist, who has shot with the celebrities at their homes.

Among her guests are B-Town stars, sportsmen, business honchos and politicians.

Produced by Zee, it is being launched on Republic Day in keeping with the show's theme that conveys the message of unity, prosperity and progress.

"The guests are those who have left a mark in their fields and can inspire Indians to put India First," adds Shaina.

"The programme aims at driving home the point that India's success is a story of unity. Each of the guests provides their own insights."

Elaborating on what her guests have stated on the show, Shaina says, "While SRK maintains that he is an entertainer, for Leander Paes what matters is winning for India whether it is a Grand Slam or any international tourney.

Karan Johar has delved into the gay movement in the country." Incidentally, Shaina has styled herself for the show from her own designer label!