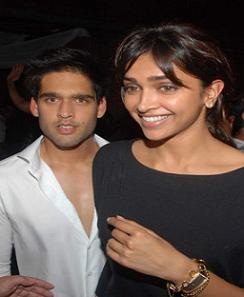 Dating Deepika Padukone seems to have inspired Siddharth Mallya to start his very own film production house. The Kingfisher heir is working towards making films by start of next year.
Right now, it's all under wraps, as Siddharth's idea of getting into the business of making films is in its nascent stage.
He is slowly but surely working towards getting together a team of talented people who will help him achieve his goal.
A source reveals, "Sid loves watching movies and is very excited at the prospect of launching a banner. He's wanted to do this for a long time, but having Deepika by his side has boosted his confidence.
His business skills have primarily been towards his father's group of industries, but now he wants to expand their existing areas of work and add a film company."
While Dippy is pursuing her career as a leading actress, Sid has no acting ambitions whatsoever. Instead, he's keen on calling the shots, supervising projects and getting a team of directors who will make films for his banner.
The source adds, "It's something he has discussed with his friends. Being with Deepika, he's been able to experience a slice of Bollywood.
And this isn't a passing hobby. He is serious about making films."
Mallya Jr plans to set the ball rolling in early 2012. Also it's too early to speculate if his actress girlfriend will feature in his films.
Posted by Deepa at 7:31 PM