Madhuri becomes a crown to fight for 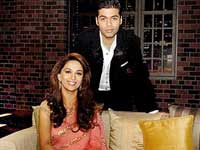 While, Madhuri Dixit and her fans are patiently looking forward to her come back in Bollywood. Karan Johar is planning to get the dancing beauty on his celebrity chat show, Koffee With Karan. However, Karan is wondering whom he should pair with her on his show.
As soon as this news was spread across Btown, Karan Johar's phone has been continue sly ringing. Surprised? Read On
All the top notch actress has been calling KJo requesting him to invite them on the show with Madhuri. These actresses are very keen to be on the show, with the dancing diva with just a small wish of sharing the couch and a mug of coffee with her.
Karan who is totally exhausted after attending so many calls for Madhuri reveals to Mid Day that, “I can't say I'm amazed by Madhuri's popularity. When I decided to invite her on my show I didn't know that her popularity seeps down right to the youngest of Bollywood. I am very keen to bring her on with one of the younger actresses. But I really don't know whom to zero in on. It's a really tough call.”
Yes, Karan it is definitely a tough call for you, but as for Madhuri, she will be fine with anybody you pair her with on the show. Madhuri is presently judging the dance reality show Jhalak Dikhla Jaa. Along with that the actress will be seen as the brand ambassador for celebrity Chef Sanjeev Kapoor's food channel, FoodFood.
Posted by Deepa at 8:27 PM