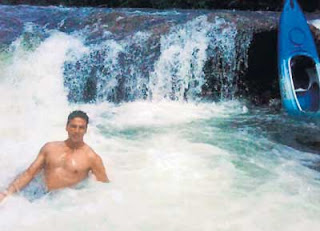 Akshay Kumar recently got into a scrape with alligators while shooting a cola ad in Malaysia. Says a source close to the actor, "Akshay loves all risky stunts from car chases to diving down waterfalls.
Of course, most of this he does for his films. So when the cola brand he endorses wanted to shoot the ad in Malaysia, Akki suggested that he fight crocodiles and go white water rafting.
The concept would be how Akshay fights crocs and dives down from his boat into the river to rescue his cola."
The unit, accompanied by the crocodile trainers, started shooting early one morning in the jungles of Gopeng Perak.
Khiladi Kumar was to go white water rafting, jump down from the raft into the river, dodge the crocs and swim to safety.
"When he jumped into the water the crocs were at a safe distance. However, something happened, and one of the reptiles lunged towards the actor."
All Akshay could see was its menacing jaw rushing towards him. "He froze for a split second. He has indulged in plenty of extreme-action stunts but fighting a crocodile is something he hasn't done in real life.
He turned around, grabbed the raft and quickly swung onto it and started rowing away as fast as he could till he reached a place of safety.
His presence of mind saved him. Fortunately, they got some great shots of the actor with the crocs and he didn't have to re-shoot."
According to the source, "AK has fought sharks while shooting for Blue. There too, he had an accident and got injured. But he loves thrills and the cola he endorses is all about thrilling action and excitement."
DID YOU KNOW?
Our source reveals, "Akki is waiting to complete 12 years with the cola company so he can set a record for being the longest-serving celebrity endorser."
Posted by Deepa at 2:00 PM