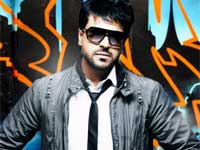 Ram Charan Teja starrer Merupu, which has been in the news for over a year, has reportedly being delayed again. The speculations are doing rounds that the movie's high-budget is the reason behind it.
Megastar Chiranjeevi has reportedly told Dharani that the estimated budget quoted by the director has surprised him. So, he has urged the director to reduce it, as it is difficult to recover the invested money of the movie, if it fails at the box-office.
Sources say that Ram Charan Teja's recent movie Orange's poor performance at the box-office, has made Chiru to play safe. It may recalled that Chiru had also directed Ram Charan to return his remuneration to the producer to reduce the financial burden from losses.
Posted by Deepa at 1:49 PM