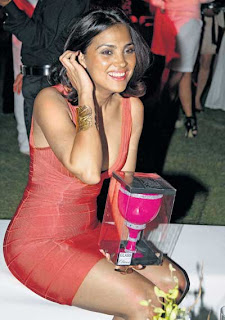 Lara Dutta ties the knot with tennis ace Mahesh Bhupathi on February 19. Ahead of the festivities, her close friend and fashion retail CEO Raza Beig threw her a lavish hen party at his Dubai house over the weekend.
The actress and 14 friends were flown down and were put up at the Madinat Jumeirah resort. The bash was at Raza's villa at The Palms overlooking the Atlantis.
The theme was red-and-white and the whole setup was done keeping Lara's tastes in mind. Bright red cushions bore the actress' name, her favourite starters were served and cocktails decked the bar.
A source gives the details, "It was one of the most high-profile parties held in Dubai and top socialites and the fashion fraternity attended.
Dutta has known Beig for quite some time now and she was extremely touched by his gesture."
Of his friendship with the actress, the CEO says, "I know her from before and am very fond of her. Lara's not just beautiful but genuinely warm and affectionate.
It was a memorable night not just for her, but also for everyone invited."
The entire event turned out to be a big surprise for the actress. The source adds, "She didn't know there would be 200 people. Her idea was of a quiet sit-down dinner.
When she entered the venue, it was a giant surprise for her to see so many of her friends. Lara looked stunning in her red Herve Leger dress."
Her friends included former designer Xerxes Bhatena, fitness expert Deanne Pandey, model Marianne De Souza, and Alison, a landscapist who kept her company throughout the night.
The menu included wasabi shrimp, pepper chicken and mushrooms from a Thai restaurant. A DJ played some of Lara's popular songs from Housefull.
It is believed that Lara was keen on having her bachelorette party in Dubai because it would be a welcome break from Mumbai.
In fact, she would also be in the city after her wedding as Mahesh plays at the Dubai Open.
Posted by Deepa at 7:52 PM